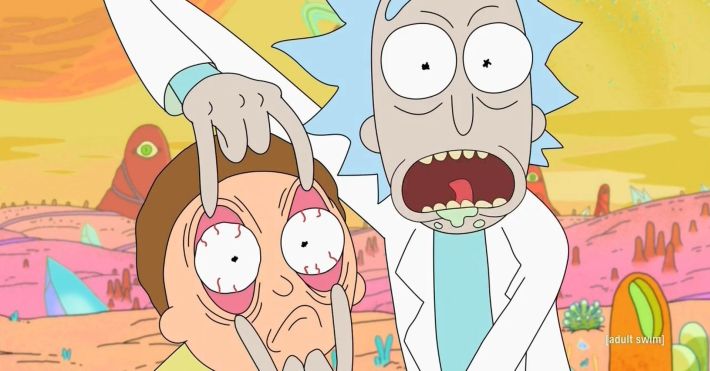 Rick Sanchez is the consummate archetypal crazy scientist. He has become a God that not only creates and destroys worlds, but has immediate access to any number of universes. He is our dear – not mentioned by the creators for copyright reasons – Doc Brown, a childhood hero of mind-blowing “Great Scott!” amazements, but gone rogue, X-rated. But he is also the sinister Dr. Strangelove and Kurt Vonnegut’s unempathic Felix Hoenikker – only with a bit more of a Bukowsky and hedonistic flavor to boot.

And, in an unforeseen twist, he is a family man.

In short, he is the science in science fiction – only decadent, and not in a patina wabi-sabi Blade Runner/Tatooine “technology gets worn out” kind of way, but opium-den decadent. The amazement and horror of what our great human minds are capable of, plus a hangover. His are not artificial paradises, but virtual wastelands of life in videogames – and we have a gut understanding of just such a thing, the omnipresent screen staring back at us.

“It’s best not to think of it”. Sanchez already knows the weird ramifications of all he’s just done, and all those things are not only horrible, but profoundly absurd. In the same way, we don’t really want to look at either our overconsumption of the Earth’s resources or plain pills-and-alcohol medication, or binge watching TV. Sometimes we do leer over the (lack of) meaning in all of it, as to find a sense of guilt to reassure us we’re human, but Rick Sanchez has long time ago dropped such amenities. He is our post-modern projected collective consciousness, channeled through Dan Harmon and Justin Roiland as a world-weary independent frustrated genius and intergalactic criminal.

Sounds like a horrible person, but like with a master comedian, his vulnerability reaches us all the while he surely but ever so slightly crosses the border, raping our minds with its own limits, revealing nasty truths – both sexual and terrifying, Eros and Thanatos – and the cosmic horror of it all. This manic devilishly clever puppet of multiverses mainly quips about our lack of meaning, embraced as a post-depression anxiety of self-referential inception-like creator and creation, a theme much repeated in the series, with the raising of Gazorpazorp or Abradolf Lincler, or “The Ricks Must be Crazy” matryoshka universes.

“What is my purpose?”, the small table robot asks.

“Oh my god!”, the robot realizes the futility of its existence.

“Yeah, welcome to the club, pal.” Says Rick, with the empathy of middle-management boss just caught in the gears of capitalism, like everyone else. But this is not class-warfare, it’s existential-warfare. Those are the gears of a much more chthonic ideology.

Rick is an impersonal cosmic force, he doesn’t give a fuck, and we just ride in his adventures like the cosmically instanced Morty c-171, half in trauma, half dazzled.

Jerry, on the other hand, represents core normosis, people who “can’t handle the truth”, and who want to be successful according to the normal goals of society and standard roles such as masculinity. His “don’t think about it” is way different than Rick’s. But he is even more of a target in the harsh realities we end certainly being presented with, especially in these “hypernormal” high-frequency-trading, post-truth, President Trump times. He suffers doubly, for his inadequacy in the dream sanitized world he postulates, and because said sanitized dream world can’t itself stand reality.

Dan Harmon has said that “The knowledge that nothing matters gets you nowhere. You zoom in and see the things that matter: I love my dog, I love my girlfriend. Knowing the truth that nothing matters can save you in those times. Every moment is the most important moment, and everything is the meaning of life.” It sounds as the series is a self-help manual, but Harmon is also pretty conscious of the reset-effect a TV serial needs to have. We are always back to square one, which is “everything is normal”, Rick is a crazy son-of-a-bitch who has PTSD over his own geniality. Family schmucks, all the hug-and-learning needs to the washed out again and again, and Rick needs to stay oscillating between suicidal and maniac.

We? We just need more, and fast.

That is not to say the series has no heart. The series gets to be boldly depressing because we care enough about those people, and particularly Rick, who is the image of all failed parents, failed institutions, failed ideologies, we grown through; particularly science itself, since religion has been dead for a while for smart hip people. So science is, as in all science fiction, the source of wonder and terror – that it truly is in reality, since we have awakened to this age where not only we can destroy ourselves, but we see ourselves having done the irreparable damages that will lead to inevitable destruction. All the while, amused to death in our screens and watercooler talk – as if millennials had jobs to watercooler-talk around. You wish.

We have arrived at a Trump-dystopia, and that could only come from the crazy experiments of technocrats, hackers and cleptocrats with the mind and ideologies of the masses. It is dumbness and bad taste amplified and given power and voice. The Ricks Must be Crazy, because the Ricks have always been crazy, tormented in their nihilistic abandon, the absurdist hedonism of Szechuan Sauce and the “I am the best Rick of all the Ricks” Trumpiam disorder.

Yet, unlike Family Guy, which is cynically nihilist, making fun of everything at the expense of everything, Rick and Morty has a communal delight more similar to the camaraderie that happens after talking a roller-coaster together, or going to war together – we share Rick’s PTSD, be it just cable news and Facebook PTSD. That includes the creators, fans and the characters. We are having fun together while the existential dread and the very real threat of exponentially high-frequency modernity engulfs us. There is no salvation, but Rick and Morty is our very own Sichuan Sauce – sweet and pungent.
Rick and Morty is the most wild quick-intelligence entertainment ever conceived. Its infinite Easter-egg mentality, crafted with the utmost care of the obsessive compulsive, mixed with the improvised light tone and the obscurest, yet not overcrowded, references, makes for a particularly exquisite confection. We might lack meaning, but this kind of apocalyptic catharsis has only two ends: more of the same, or the total destruction of whatever cannot withstand or distorts reality. The second option is preferable. 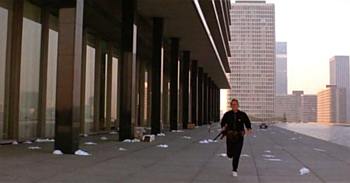 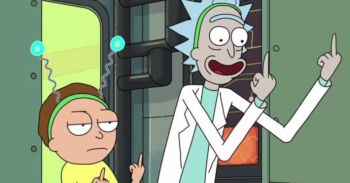 Horrible Rick & Morty Fans
Demonstrate How Not to Be a Fan

Basically bros who think Rick is a role model to be followed, and not something more like a fun cautionary example (or even a representation of the writers themselves trying to work out -- with no clear answer -- the ethical freedom and abyssal responsibility of the very act of writing fiction, something by its own nature a many-worlds landscape of sorts). // Why does everyone hate fans of the sci-fi cartoon Rick & Morty? It’s a question that spawned two massive threads on the Rick & Morty fansite known as Reddit.
Rick and Morty 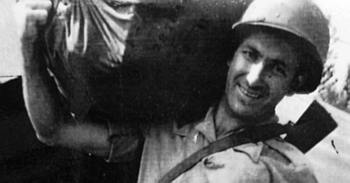 Something I wrote after I fortuitously met a WW2 veteran in 2006.
Pinheiro 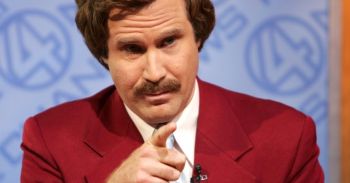